And Then There Were Three: DFS City Council Takes a Chance on City Manager Applicant With Job Offer 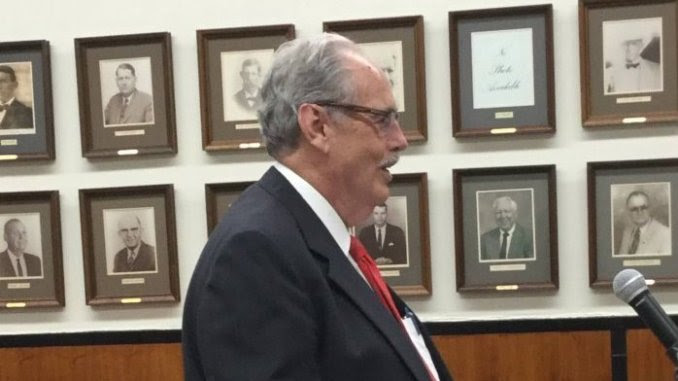 HAROLD J. EMRICH WAS THE FINAL PICK after much discussion for the first job offer for the DeFuniak Springs City Manager position after the interview process concluded Aug. 21, 2017.

Three applicants, all well qualified but with very different management styles and focus areas interviewed before the DeFuniak Springs City Council and a small crowd of citizens the evening of Aug. 21, 2017.

The council did not have an easy task on their hands, but worked hard together to discuss their choices, as well as to sway each other to a multiple tied vote of 2-2 many times until coming to the final vote of offering the position first to veteran public sector management applicant Harold J. Emrich.
Emrich, along with Marcus Collins, and Danny Lucas all came before the council to answer questions about goals, management styles, expectations, and past job history and performance.
Collins came in first to interview and also seemed to hold the council’s first choice position from past ranking meetings only to end up last in the group at the end of the night.
Presenting with go-getter energy, ample confidence, and 30 years of experience, Collins seemed to have a lock on the opportunity, but as the night wore on it was evident that all three highly experienced individuals brought different styles, and direction for the city to consider.

Collins has held the position of city manager in the past for Callaway, Williston, and Crescent City, Fla., as well as public services director for Mount Dora, among other management positions, professional licenses, and accolades. His education includes two masters degrees, one in occupational health and safety and the other in environmental management. He lists a plethora of awards for past performance, and proclamations from Apopka and Crescent City, which declared days in his honor at both municipalities.
Collins told the council he would put together incentive packages to lure new business to the area, and he was well versed in taking municipalities that had lost their focus or were suffering financial difficulties and turning the situation around quickly and efficiently.

His confidence seemed to be a double-edged sword during discussions at the end of the night. Some council members felt he was very self-focused. They noted his use of the word “I” in much of his conversations with the council. There was also one issue of him leaving a past city position for a private engineering firm; he disputed in the interview that this was a paid position, but rather a favor for a friend. Later during discussions, council member Ron Kelley produced a newspaper report in direct contrast to his response about the job, and a $130,000 salary, and then there were two.

The second interview subject, Harold J. Emrich, was the total opposite of Collins in his presentation and interview manner. With 30 plus years of experience in public administration, a bachelors in Political Science with an emphasis on business administration, and a MPA in municipal/local government administration, Emrich spoke in an almost soothing but authoritative tone. He answered questions the council threw at him, never avoiding or deflecting any. He emphasized the importance of ethics, doing the right thing, following established policy, and of members learning to build trust to work together, with him as a facilitator of their vision for the city.
Emrich has held city manager positions in Madison, Marianna, Deltona, Jackson County, Greensboro, and Largo, Fla, and two other cities in Oklahoma. Emrich was well versed in building and needs for office and city structure, and how to grow a municipality.

Research through multiple articles in The Orlando Sentinel shows Emrich has not been without controversy in Jackson County and Deltona, but many of those articles wrote of his ability to get new cities or counties up and working, putting structures into place that could function long after he had left.
The Orlando Sentinel ran an article in June 30, 1996, which stated: “It is, perhaps, unfair that Emrich might best be remembered in Jackson County as the lightning rod in the political maelstrom between progress and a ‘’good old boy system’ resistant to change. His supporters and those who worked for him say his impact on the county will be felt long after his departure – only somebody else will probably receive popular credit for it.”

“One of Harold’s biggest contributions to the county was that he raised the level of professionalism within the county,” said Bob Nix, Jackson’s County’s community development director.

“He created a system, a more administrative approach of getting things done,” said Wendallcq Taylor, executive director of the Marianna Chamber of Commerce.

Emrich is portrayed as one not afraid to stand up and stick to policy when confronted by past political or non-existent systems. In the same article from the Sentinal: ”I think what you saw here was some remnants of the ‘good old boy’ system,” said Willie Spires, chairman of the Board of Commissioners. They wanted to see government run the way it used to be, but you simply cannot run a government that way anymore.’To succeed in modern government, you must be able to work within the system,” Spires said – or create one where it doesn’t exist, as Emrich will be asked to do in Deltona.”

The Deltona position was bittersweet for Emrich. Published reports from the Sentinel as well walk readers through the birth of a new city, infighting between council members over power and management styles, and a man that did his job without a job description.

The Council there is quoted as telling him to work out his own objectives for the city, outline his own job responsibility, craft goals for the city, and a few years later, according to some reports be let go in a surprise move for “growing the city and building the infrastructure too quickly” or having an abrupt or authoritative management style, yet he was not informed of any issues before mixed reviews on his first job evaluation given at the two year mark, nor was he offered the chance to improve any critical areas in the “abrupt” and some write “politically motivated” 4-3 council vote.

The one common thread among all of Emrich’s past positions that are publicly documented seem to be his quiet demeanor, and lack of need for the spotlight when leaving a job by choice or by vote, rarely speaking to the press at any length.

Some love and admire his style of management as indicated from research providing structure for city government growth, and getting things done, offices up and running by the book, while others complain about him having too much power, or his non-flowery responses with some elected officials and staff.

When asked why he decided to apply, Emrich told the council he wants to work, and go fishing, and it seemed DeFuniak offered ample opportunities for both. He’s currently employed as the town manager in Greensboro, Fla., from 2013 to the present.

He also did his homework, attending several council meetings quietly and talking with much of the staff over the last month, whom he had great compliments for over their responses and abilities. He praised many staff members more then once for their honesty in response to questions.

The third applicant , Danny Lucas, drew some of the highest praise from the council during discussions after the interviews, as well as displaying an entirely different type of leadership style.

Lucas was described as having the most passion for the job of the three, as well as being “all business” and professional.

With 28 years of management experience, 12 of those in city manager positions, Lucas impressed council members with his longevity as having spent the last 10 years in the position of town administrator for Estill, South Carolina.

A certified grant writer, Lucas has brought home the bacon for many small communities and small airports he has managed. An industrial engineer, Lucas has overseen growth and revamping for airports similar to the size of the one in DeFuniak he flew into after a 10 hour flight the day prior to the interviews.

When asked about downtown revitalization Lucas was quick to answer that vibrancy, having people living and working in the historic district to increase visible foot traffic was a necessity. The combination or living above the department stores gives small towns the appearance of always having life, and that was what made people stop their car and look around, instead of just drive through. Mixed use in small towns on main street breath new life into the entire area he said.

The issues of blight, time spent in one job position, leadership style with staff and communications with council members, professionalism, and experience with extending the city limits for towns like DeFuniak Springs were many of the main subjects that guided the council during the interview and discussion process.

Many said they were fine with all three, or Lucas and Emrich. Others mentioned not rushing and interviewing more applicants. In the end, Emrich squeaked by Lucas, with council members and others lobbying for him due to his years of experience in creating or putting things back in order, and keeping structure.

Salary negotiations may reveal a new wrinkle or contender, but at the end of the night, the council voted for Interim Manager Craig Drake to contact Emrich and start the job offer process including salary negotiations for DeFuniak Springs to fill the city manager position.

When DeFuniak Springs Council Met August 23, 2017 for the special meeting relating to the City Manager Salary Compensation, City Manager Craig Drake stated Harold Emrich has requested an annual salary of $95,000 with a start date of 30 to 60 days and would negotiate to middle pay sale range, with the pay scale being between $70,298.56 to $119,042.98.  Councilman Wright made a motion to reject the desired salary offer of $90,000 requested by Harold Emrich and Emrich’s candidacy for the City Manager position, seconded by Councilman Ennis.  The motion carried 5-0.

Councilman Wright made a motion to offer a maximum annual salary of $80,000 to Danny Lucas for the city manager position to start employment prior to or around October 1, 2017, seconded by Councilman Kelly.  Motion carried 4-1

These are things you may think about:

Karin for the blog

Honestly Joe and I have been jumping with joy in the anticipation of this man being offered a position of Town Manager and his accepting the position.   He would work nicely with staff, and straighten out White Springs without being a Tyrant and taking credit which is not due him like Tommie Jones.