I hope you have your scuba gear, ’cause this one goes DEEP. Father of the now infamous Dr.Christine Blasey Ford, Ralph G Blasey, Jr. of Potomac Maryland has a few nefarious ties that just may shed some light into the shadowy corners of Dr. Ford’s vague testimony.

Who is Ralph G Blasey, Jr.?

because their uniformed officers are stationed in the lobbies of practically every single-solitary building in the metropolitan area. What is of particularly notable interest is that he was once Vice President of National Savings and Trust of Washington, D.C.

Why is that important? The National Savings & Trust of Washington, D.C. is located “barely 100 paces from the White House”, directly across the street from the Treasury Department, and was built in 1888 by James Hamilton Windrim (best known for the Philadelphia Masonic Temple). If there was ever a “Bank of the Swamp”, this is it.

As V.P. of National Savings & Trust from 1962-’74 (now SunTrust – owned by BlackRock) Ralph directly reported to Nicholas Deak who was chairman of the Deak-Perera group and a secret service operative, serving both in the OSS during World War II and its successor the CIA during the Cold War. Deak was primarily a banker, more specifically, he was the CIA’s paymaster. When he was assassinated by “a mentally unstable and homeless woman, Lois Lang” in 1985. Blasey took over his responsibilities becoming the CIA’s new paymaster.

Layer after layer of mystery surrounded Lois Lang’s roll in the assassination of Nicholas Deak. How did “a mentally unstable homeless woman” travel thousands of miles from Santa Clara Valley Medical Center to New York and why did she kill a man that she never knew? 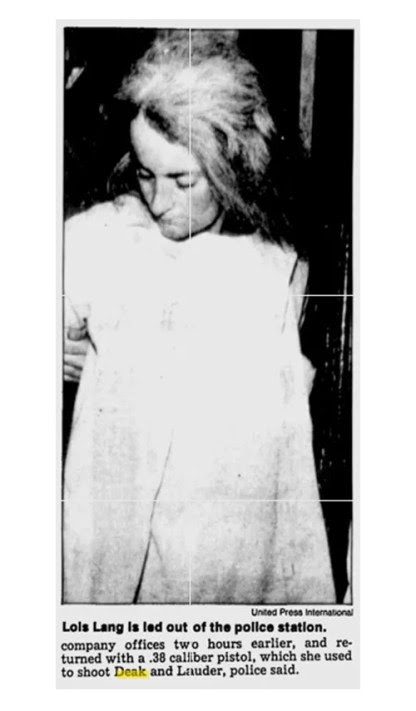 She had apparently started to lose her grip on reality while she was coaching women’s tennis and fencing at the University of of California-Santa Barbara.

In 1970, the university declined to renew her coaching contract. Lang and her husband soon divorced. Her life quickly became a blur. Lang complained of “amnesia” and said that her ex-husband’s business partner moved her into an apartment in Mountain View, Calif., where she lived on “grants” and “took flying lessons” […]  She told psychiatrists in 1985 that this business partner, or his “fakes,” took her to Deak’s offices at 29 Broadway in 1971. She said that “friends” taught her marksmanship at firing ranges.

Even more precarious is what happened to her after the assassination. Lang was put under the care of a Dr. Frederick Melges of the Stanford Research Institute which received CIA funding. Dr. Melges published work about using drugs and hypnosis to create “disassociative states,” i.e., induced schizophrenia. A few years after Lang was put in Melges’ care, the New York Times exposed the Stanford Research Institute as a center for CIA research into “brain-washing” and “mind-control” experiments (MK-ULTRA) in which unwitting subjects were dosed with hallucinogenic drugs and subjected to hypnosis.

What does Stanford, the CIA, and MK-ULTRA have to do with Dr. Christine Blasey Ford? It just so happens that she oversees the Stanford CIA Undergraduate Internship Program.

Dr. Christine Blasey Ford is an American professor of psychology at Palo Alto University and a research psychologist at the Stanford University School of Medicine (funny how Stanford seems to be at the center of all of this- see my article on the similarities between Ford’s story and that of Sen Cory Booker’s, also a Stanford Alum)

Sen Corey Booker, who made a grandiose gesture by walking out of the committee hearing on 9/27 during which the committee was to vote on the recommendation of Judge Kavanaugh’s appointment to the Supreme Court, wrote the above article in The Stanford Daily in 1992. Blasey Ford began teaching at Stanford University in 1988 so she was there at the same time as Booker. Coincidence?

Some of Dr. Ford’s publications include:

That should give you some insight into what type of Psychologist she is. In short, she understands perfectly well how to put on a portrayal of a person that has been through a traumatic event such as the one she’s claiming happened to her. It would be easy for someone in her field of research. When she wasn’t goofing around and joking with the prosecutor, she spoke with a quivering voice and yet she had no tears. She needed no tissues. She didn’t pause from getting choked-up. Her testimony was a stark contrast to that of Kavanaughs, a whole family now traumatized from the lies made up by the Democrats to smear his good name.

This whole situation stinks to high heaven. Whenever I speak the term “The Deep State” to someone not well-versed on the subject, I notice a slight squinting of the eyes, a tilt of the head, and a roll of the eyes. People, the deep state is a thing. It’s as real as water and it took over full control of our government when they assassinated Kennedy (NO, Russia did not kill Kennedy- shocker!). President Trump is at war with them. The battles are being fought in front of our very eyes, day after day. This is the “Battle of Kavanaugh”.

I don’t know about you, but I’m tired of being a slave. I don’t want to be told what to eat, what to say, and what not to say. I don’t want to live on an allowance from the government. I want to be free! I want to be left alone! To worship who I want to worship, to think for myself, to be able to take care of myself- not to be babied. Why does over half of the country want the government telling them how to live? It’s insanity! Trump is the only person standing in the way of their plan of total domination- complete and total slavery. If you don’t like it: leave! There’s plenty of other places you can live to be a good little slave. No one is making you stay here.

Sent from my iPhone