On Thursday morning, Rep. Trey Gowdy of South Carolina absolutely went off on Peter Strozk during his first public testimony into the Anti-Trump texts he sent while working with the FBI.

Gowdy slammed Strozk’s bias and he didn’t hold back one bit. He started off by listing off the many powers that FBI agents are given, including checking phone records, accessing private information, and much much more.

The South Carolina Rep blasted Strozk for abusing these powers in order to derail President Trump.

“These are awesome powers that must be used responsibly because these powers affect reputations and freedom,” he began.

Then, Gowdy began absolutely ripping into the biased Anti-Trump agent for his extreme bias.

“About two weeks ago FBI agent Strozk was interviewed for more than 2 hours. We learned that Strozk has a most unusual and largely self-serving definition of bias. Agent Strozk, despite the plain language of his texts and emails, despite Inspector General’s report and despite common sense doesn’t think he was bias,” Gowdy continued.

Watch the full opening statement below:

“That is for one of the folks he was investigating. He has a different rules for others that he is investigating. Strozk thinks that the person (Hillary) he is investigating should be elected president 100 million to zero. He doestn’ think thats bias. Agent Strozk pronouncing someone innocent before bothering to interview 30 different witness isn’t bias”, Gowdy added.

Rep Goodlatte also ripped into Strozk for these same reasons:

“Imagine if you were under investigation and the investigator hated you, disparaged you in all manner of ways, and fraternized with another employee working on your case, who also hated you, denigrated your supporters.” 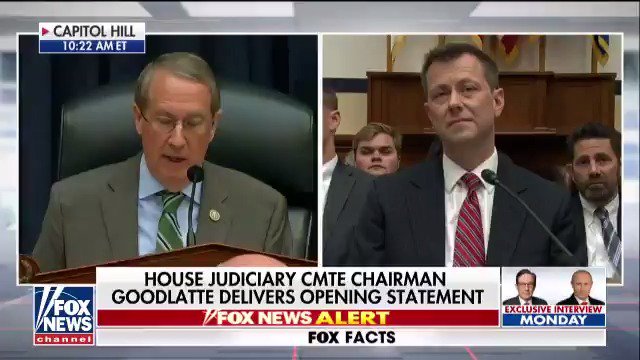 .@RepGoodlatte: “Imagine if you were under investigation and the investigator hated you, disparaged you in all manner of ways, and fraternized with another employee working on your case, who also hated you, denigrated your supporters.”