Sen. Tim Scott (R-SC) responded Friday to claims about the unemployment rate that were made this past week by Democratic socialist Alexandria Ocasio-Cortez, who is gaining prominence in the party after her stunning primary victory over fourth-ranking House Democrat Joe Crowley (NY), and similar jobs claims made by Sen. Liz Warren (D-MA).

She has since tried to walk back the remarks by claiming that they were really about low wages.

Not to be outdone, progressive Sen. Liz Warren argued that due to low wages people were forced to work “two, three, or four jobs to try to pay the rent and keep food on the table.”

Sen. Scott told Fox & Friends that such commentary was “theater” and simply cited the number of people working more than one job, according to the latest data from the Bureau of Labor Statistics. 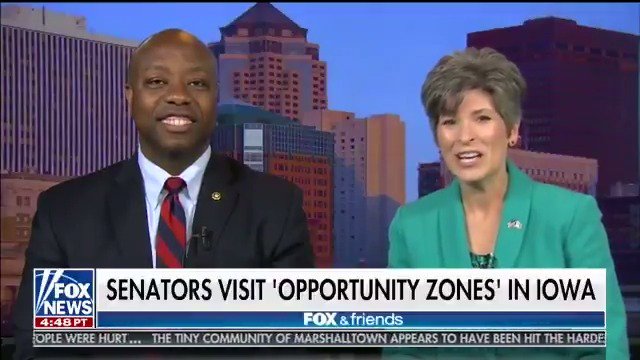 Great to join @SenJoniErnst on Fox & Friends this morning from Iowa to discuss #opportunityzones, my #TSOpportunityTour and our strong economy.

Both Politifact and Factcheck.org also rated Ocasio-Cortez’s claim about unemployment as false, pointing out, as Scott did, that “over the past 12 months, the number of multiple job holders has ranged between 6 million and 7 million. That compares to more than 148 million Americans who are employed in a single job.”

Pro-Gun Advocate Ted Nugent Was Forced To Turned Away Firearms At His Latest Concert. Here’s Why.

Their comments were theater,” Scott emphasized. “Anyone who wants to attack the Trump economy must find a way to do it in theater.”

“Unemployment is so low that the long-term unemployed are coming back to work,” he pointed out. “And we have a 45-year high in optimism from small businesses.”

Scott noted that it was entertaining to watch the left react to the record lows in unemployment.

“The left is losing their mind,” he said. “This is kind of fun to watch on TV because no one believes what they are saying. It’s so far out of the realm of reality. We are in good shape.”

WaPo Conservative: I Miss Obama And Would Take Him Back In A Nanosecond

Liberals Get A Dose Of Their Own Medicine

Lindsey Graham In Epic Understatement Says Carter Page FISA Warrant Is Based On “Garbage”
REDSTATE
Trey Gowdy: If there was any evidence that Trump colluded, Adam Schiff would have leaked it already
HOTAIR