To the distaste of the Democrats, Kim Jong Un has released a glowing new letter to President Donald Trump after their meeting in Singapore last month. While the media and the Democrats were desperately hoping for the Denuclearization deal to fall apart, it doesn’t appear that will be happening on President Trump’s watch!

According to a new a letter released by President Trump, Kim Jong Un expressed hope for the future of relations between North Korea and the United States.

Here is the full text of the letter:

The significant first meeting with Your Excellency and the count statement hat we signed together in Singapore 24 days ago was indeed the start of a meaningful journey.

I deeply appreciate the energetic and extraordinary efforts made by Your Excellency Mr. President for the improvement of relations between the two countries and the faithful implementation of the joint statement.

I firmly believe that the strong will, sincere effort and unique approach of myself and you excellency Mr. President aimed at opening up a new future between the DPRK and the U.S. will surely come to fruition.

Wishing that the invariably truest and confidence in Your Excellency Mr. President will be further strengthened in the future process of taking practical actions, I extend my conviction that the epochal progress in promoting the DPRK-U.S. relations will bring our next meeting forward,

Here is Trump’s official tweet where he posted the full letter: 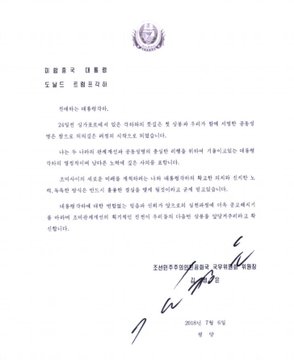 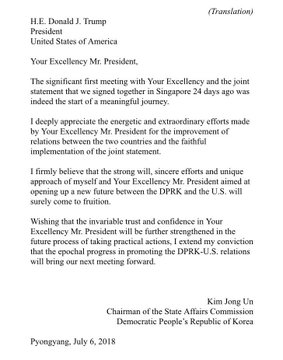 A very nice note from Chairman Kim of North Korea. Great progress being made!

Looks like things keep looking up with the North Korea peace deal! The Democrats don’t want peace with North Korea, but President Trump DOES! He has proven that he will do whatever it takes to bring peace between the two nations.