President Trump arrived at his Luxury Resort, Trump Turnberry, in Scotland around 9:30 PM when there was a massive security breach above him.

According to The Sun:

A paragliding protester swooped within a few feet of Donald Trump’s head as elite snipers looked on today.

The Greenpeace activist flew over Trump’s Turnberry golf course with a sign emblazoned with the phase ‘Trump well below par’.

They were lucky not to be shot out the sky as the President’s elite snipers teamed their guns at the aerial threat from the roof above.

Officers are seeking the pilot, calling it a criminal offence.

Mark Williams, Police Scotland’s Assistant stated: “We are aware a powered parachute was flown in close proximity of the Turnberry Hotel earlier this evening. It is a criminal offence to fly within the airspace restriction zone and officers are carrying out enquiries to trace the pilot.

Watch the scene unfold below:

Donald Trump’s arrival with the First Lady at his Turnberry golf course in Scotland has been met with a protest from the air. A Greenpeace paraglider propelled past him with a banner saying ‘Trump well below par’ – it was in protest at his stance on green issues. Watch video here 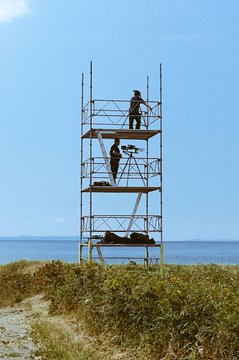 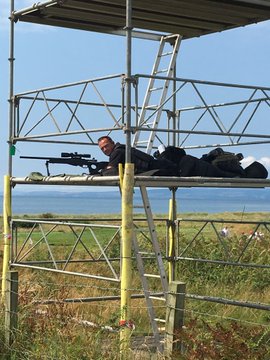 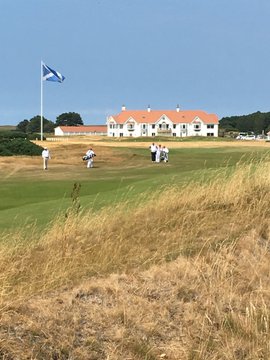 The President purchased the luxury resort and legendary golf course in 2014 after striking a cash deal with Leisurecorp, a subsidiary of the Dubai government.

Donald Trump, who has long stated his desire to play host to a men’s major championship at one of his many golf courses, has completed his purchase of Turnberry Resort in Scotland. The Ailsa Course at Turnberry, located on Scotland’s west coast, has been the site of four Open Championships and will likely do so again.

“It was an opportunity, as far as I was concerned,” Trump told GOLF.com, which first reported the purchase as final. “Turnberry is considered one of the greatest courses in the world. It’s a special place. It’s an important place.”

Overall, the President should be pretty safe at his resort, however, this security breach causes serious concerns as the President travels overseas.