With less than six weeks until the new season kicks off, the National Football League is once again mired in the endless controversy of disrespectful and divisive protests of the national anthem.

Following last year’s debacle when hordes of multimillionaire malcontents angered fans by taking a knee during or thrusting fists in the air during the rendition of the Star Spangled Banner, the suits in the NFL offices along with Commissioner Roger Goodell mistakenly believed that a new rule banning the on-field displays by carving out an exemption for locker room safe spaces would be the end of the problem.

But once again, the feckless Goodell badly miscalculated just as he has continued to do ever since not nipping the whole fiasco in the bud by suspending Colin Kaepernick in 2016.

By failing to act, Goodell allowed the situation to fester and then morph into protests against President Trump despite what Kaepernick’s original intent may have been. The situation exploded last year, fans began finding other things to do on Sundays and television ratings plummeted.

There were also those embarrassing empty seats in stadiums.

But Goodell worked out what for all intents and purposes appeared to be a bribe when the league agreed to send $90 million to primarily black organizations for social justice training. It was decried by some like former superstar running back Herschel Walker as “hush money” but the NFL was planning on the kneelers holding up their end of the bargain.

It only took a few months before the commish learned that you can’t cut deals with extremists and after the player’s union filed a lawsuit against the new rule, the league ran up the white flag of surrender and put that rule on hold.

Unfortunately for the league and fans, there is no resolution to his fiasco unless players start policing their own ranks and speaking up against the troublemakers and their puppeteers who have brought ruin to the game and alienated millions of previously die-hard fans.

We now have one player who has dared to risk the vengeance of the SJW social media mob by speaking out about how the protests have sucked the joy out of the game.

Let’s have a big round of applause for Dallas Cowboys star quarterback Dak Prescott! 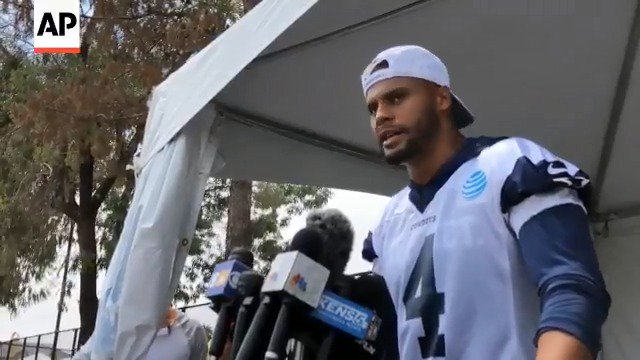 Already a leader of the Cowboys in his third season, Dak Prescott says he would never protest during the national anthem @apschuyler http://apne.ws/zXyXsKk

Dak Prescott’s best test yet as the new face of the Cowboys came two days after owner Jerry Jones once again declared that all Dallas players will stand for the national anthem and even said they wouldn’t be afforded the alternative of staying in the locker room.

The star quarterback didn’t pause or stammer. He didn’t stop himself to consider what his peers might think. He made it clear he will stand, and doesn’t think it’s right to do otherwise.

“Whether I was wearing the star or not, whether I was playing for Jerry Jones, Stephen Jones or any other owner, I believe in what I believe in and that’s that,” Prescott said Friday in his first session with reporters at training camp.

“I’d never protest during the anthem, and I don’t think that’s the time or the venue to do so,” Prescott said while adding that he respected the right of others to protest. “We know about social injustice. I’m up for taking a next step, whatever that step may be for action and not just kneeling.”

Prescott didn’t have any immediate specifics for that community action, but it’ll be a few months before he can concentrate on it fully. Right now he’s trying to get the Cowboys back to the playoffs after his encore fell flat.

It’s only a start and he is going to be accused of being everything from an Uncle Tom to a white supremacist but Prescott just showed that he is a leader and may his statement provide not only food for thought but an inspiration for players who love the game to stop allowing the entire league to be hijacked by a noisy minority of troublemakers and those in the professional grievance business who keep this farce alive.

To cite something from a recent column by Clay Travis of Outkick The Coverage:

The people protesting on behalf of Colin Kaepernick on social media? Most of them won’t sit and watch a single NFL game on Sunday. They aren’t sports fans, they’re political agitators who have grabbed onto sports as just another battlefield. To them, everything is political, even sports, which haven’t been political for nearly fifty years. That’s because sports are our American meritocracy, the one place where race, gender, class, political opinions, and sexual orientation don’t matter. The best man (or woman) wins.

Over the past decade we’ve seen two worlds emerge — the fake one on social media, which distorts public opinion like a funhouse mirror at a carnival, and the real life one, which reflects the pocketbook decisions of ordinary Americans, the kinds of people not monitoring Twitter trends all day long, the kinds of people who sit and watch the NFL all day long on Sundays in Texas.

Or at least the kinds of people who used to do that.

It sure won’t land Prescott on any magazine covers or collecting a passel of phony awards like Kaepernick but history is on his side after he just delivered an MVP worthy performance in that media conference.