Once a revered bastion of ethical reporting, the mainstream media has become a lying, scheming, conniving, leftist propaganda machine.

And they have one giant target they are seeking to destroy: President Donald J. Trump. 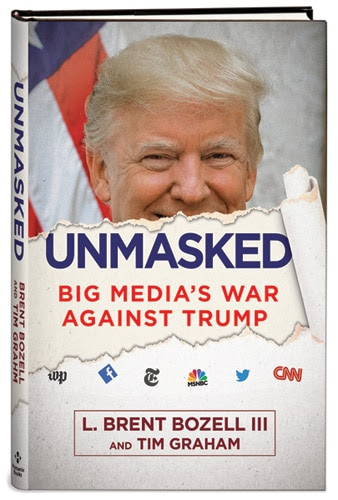 Journalists and reporters have shredded any sense of objectivity and fairness.

Their reports and commentaries seethe with hatred, bashing President Trump every chance they get.

Now, for the first time, Bozell exposes them all in his new bestseller, Unmasked: Big Media’s War Against Trump.

Unmasked exposes the media’s trail of deception, uncovers the truth, and exposes the rampant and outrageous lies perpetuated about the president by every major news network, publisher, and Hollywood elitist.

In Unmasked Bozell holds nothing back.

He names names. He rips the shroud off the establishment media.

He even reveals the 10 biggest media personalities of the Fake News.

Bozell, founder of the Media Research Center, and veteran journalist Tim Graham, the organization’s director of media analysis, wrote Unmasked and decided to name names, because they believe our freedoms are at stake.

Unmasked is not afraid to call out . . .

Washington Post editorial writers, who compared Trump’s proposed crackdown on illegal immigrants to the slaughter of millions by dictators like Stalin and Pol Pot. Page 13

National Public Radio’s On the Media host Bob Garfield, who ripped Trump for “racism, xenophobia, misogyny . . . and a nuclear recklessness, reminiscent of a raving meth-head with a machete on an episode of Cops.” Page 15

All the President’s Men journalist Carl Bernstein, who told CNN that Trump was a “neo-fascist” and a “sociopath.” Page 17

Bozell and Graham are exposing the most shocking and hateful stories about President Trump, proving beyond a shadow of a doubt that big media are so angry with the 2016 election result, they want Trump removed from office!

In Unmasked you will discover their many outright lies, including:

Time magazine stirring the pot by falsely reporting a bust of Martin Luther King Jr. had been removed from the Oval Office. Read the truth on page 40.

The New York Times narrative that phone records and intercepted calls show members of the Trump campaign had repeated contact with senior Russian officials the year before the election: WRONG! See page 37.

You’ll discover how blatant, boldfaced lies about the polls were hurled into the faces of Americans leading up to, and including, the night of the presidential election and the fabrication of the fake Russian dossier.

The left’s propaganda machine swearing Hillary Clinton would win by a landslide. ABC political analysts reporting Hillary’s margin was higher than Obama’s. And the Huffington Post declaring she was 98% likely to defeat Trump.

When Trump took it all, arrogant leftists, media outlets, and Hollywood elites mourned, wailed in the streets, cried foul and fumed, vowing to begin a hate-filled resistance campaign against Trump.

Slapped with the realization Americans didn’t want Hillary, they reeled.

NPR called Trump ignorant and racist, and other media even advocated violence.

MSNBC’s Rachel Maddow resorted to calling the newly elected president “Hitler,” while late-night talk show host Stephen Colbert would spew filthy commentary so disgusting we can’t repeat it here — but you can see exactly what he said on page 144 of your FREE COPY of Unmasked.

Quickly, it became clear the mainstream media would do anything to take Trump out, including a desperate attempt to change public opinion at all costs.

As Unmasked reveals, this would turn the tide for the media, leading to their dramatic downfall.

One of the most shocking frauds against humanity seen this century.

Deliberately designed to deceive the American people, their campaign is one of lies, untruths, half-truths, and outright fake claims against the 45th president of the United States.

Bozell and Graham unequivocally prove that since the start of Trump’s campaign, a whopping 90% of the news coverage on Trump has been negative. See page 50.

Unmasked rips the veil of deception off the media and shows how journalists have lost all credibility by spewing lies, advocating violence, and twisting the truth. Here are just a few examples of the hundreds you’ll discover in your FREE COPY of Unmasked:

ABC’s chief investigative reporter, Brian Ross, makes a jaw-dropping fake claim that caused the stock market to plummet 300 points! Think about the millions who got caught in the crossfire and got hurt financially. See page 45.

News media outlets insisting 17 intelligence agencies agreed Russia was behind the hack of Democratic emails which tried to influence the election. The real number isn’t 17 — not even close. See page 39.

Where they worship Obama, they tear Trump limb from limb . . .

Wait until you see the stark contrast in treatment between Obama and Trump in Unmasked.

Obama suffocated small business with 23,000 regulations, 25 major rules, and $122 billion in cumulative annual costs to the private sector. The media ate it up — they loved it even though it killed free enterprise.

Unmasked delivers page after page of mind-blowing examples comparing the two presidents’ treatment by the media, including coverage comparisons of the VA scandal . . . the nomination of Supreme Court justices . . . ISIS . . . revoking of press credentials . . . and more.

Yet the vicious, irresponsible, and reckless media repeatedly misleads and hides the truth from the American public.

In 2018, a list of 289 stunning accomplishments achieved in the first 20 months alone of Trump’s presidency was released, including:

22 deregulatory actions for every new one Obama created

Unemployment for women at a 65-year low!

Only an anti-American filled with hatred and out for blood wouldn’t applaud these achievements . . . but the media seethed. Remember their predictions:

MSNBC insisted the “markets are terrified” of Trump. Page 72

Bozell and Graham even take an in-depth look at October 19, 2018, when jobs data was released showing that unemployment had dropped to the lowest point in almost 50 years. They discovered:

The Big 3 networks combined gave it ONE MINUTE of coverage. You won’t believe what NBC gave far more play to, calling it “breaking news.” APPALLING! Page 75

And earlier, on May 17, 2017, when the markets dropped? NBC’s Lester Holt opened with: “Market plunge! Jitters on Wall Street! Is the so-called Trump bump over?” Holt brought on MSNBC host Stephanie Ruhle to say that the good economy and Trump’s agenda were kaput.

What else will you discover inside this riveting book?

“Fact Checks” and why they’re not to be believed. Page 121

Top 10 Biggest Trump-Bashing Haters in the media today — and their despicable statements, including suggestions Trump family members be executed. Page 213

Why Trump didn’t attend the White House Correspondents’ Dinner, and rightfully so. Since when is it acceptable to call to cut off the head of the president of the United States? Page 146

A look back to when the media became blatant liars, including Janet Cooke’s completely fictional story about an 8-year-old heroin addict that won her a Pulitzer Prize . . . and Dan Rather’s CBS report using fake documents to smear George W. Bush, which came from a Bush-hater no one vetted or validated. Pages 25-29

Bloomberg News’ fake story that Mueller “issued a subpoena” to Deutsche Bank which “zeroed in” on Trump personally. Hogwash! Page 38

Wait until you see the numbers in black and white. For example, Unmaskedgoes the distance, revealing the startling number of times the mainstream media bashes Trump, including deliberate attempts to make him look unfit:

NBC and CBS describing Trump as unhinged, calling him “angry” 185 times over an 8½–month period.

Presidential communications twisted by the networks who proclaimed Trump was “lashing out” (53 times) or “on a tirade” (8 times).

During the first 60 days, Trump was dealt more than DOUBLE the negativity seen in stories in the first two months of the Bill Clinton, George W. Bush, and Barack Obama presidencies.

Scores of negative comments made by supposed “hard news reporters” on issues such as Trump’s tax plan, the fight to dismantle Obamacare, and presidential plans to shore up the U.S.-Mexico border.

The New York Times and Washington Post’s “arrogant” promotional slogans attempting to taint public perception by “virtually declaring war” on Trump, with the Times trumpeting, “Truth: It’s More Important Now Than Ever” and the Post’s “Democracy Dies in Darkness.”

Guaranteed to be the most honest, accurate, and explosive account of media lies and deceit ever written.

Unmasked: Big Media’s War Against Trump is the first book to expose the media’s mass trail of deception and to uncover the truth.

It is vital for you to read this book — before the 2020 election!

That’s why conservative leaders like Rush Limbaugh and Mark Levin are urging Americans like you to get Unmasked.

Bozell and Graham deliver a blistering account of media lies, exposing the fraud perpetrated upon the American public since Trump announced his candidacy to the present day.

You’ll discover a riveting account of how media outlets have been blindsided by their revolting hatred for Trump right from the start, when they launched their character assassination on him in the debates — and continuing to the present day, including the Russian witch hunt.

In no uncertain terms Unmasked shows how the media obliterated their own credibility and veered dramatically off-course from reporting the news to pushing personal opinion on the American public.

Our publisher has reserved a copy of this explosive book in your name. Get it here.

Unmasked: Big Media’s War Against Trump is the one book you can’t afford to miss.

It’s a jaw-dropping, up-to-the-second account of how once most-trusted news organizations have transformed into irresponsible propaganda machines. This is the story of a media that set out to destroy a president and his administration — but destroyed themselves instead.