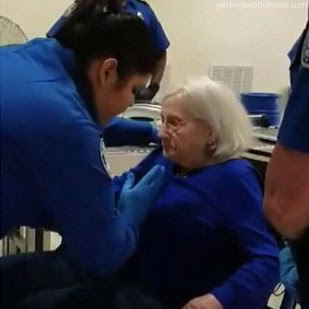 That’s when Evelyn LaBrier, the notorious terrorist cleverly camouflaging herself as a “great-great grandmother who could barely lift her arms” — in a wheelchair, no less — tried to board a plane at Washington-Dulles International Airport.

You and I would have respected, sympathized with, and perhaps even admired this 96-year-old lady in fragile health. No wonder the geniuses at the TSA don’t employ us. Instead, their crack team of Thieves and Sexual Assailants immediately recognized Mrs. LaBrier as a dire threat and felt her up — sorry, neutralized her.

Fortunately, one of the two accomplices traveling with Mrs. LaBrier — disguised as her daughter and also in a wheelchair — filmed the encounter. She then posted it to Facebook so that all of us can appreciate the TSA’s skill at gate-raping nonagenarians.

And what a gate-rape it was! The TSA’s deviants violated Mrs. LaBrier for six excruciating minutes. You’ll cringe for America’s common sense and soul at this “extensive … prolonged” and “repetitive” groping:

The TSA excuses its crime against Mrs. LaBrier because “the TSA officer provided advisements [sic; I doubt the thuggettes “provided” a “careful deliberation or consideration; consultation,” but when do bureaucrats ever use even simple words accurately, let alone a whopper like “advisement”?] during the pat-down and was extremely polite.” Really? How many rapists without uniforms could get away with that? “Your Honor, I politely asked the lady to remove her windbreaker so I could fondle her — and she refused, can ya believe it? That’s why I busted her one across the nose. But I was courteous the whole time, called her ‘ma’am,’ and provided advisements of exactly what I intended to do.”

Mrs. LaBrier’s infuriated daughter “contacted” both the TSA and Dulles Airport. The latter “called [her] back, very concerned.” But “TSA sent an unsigned form reply.”

Meanwhile, the footage of Mrs. LaBrier’s assault has “been viewed more than 9 million times online,” deservedly “spark[ing] outrage.” That had the TSA reconsidering its silence in favor of contemptuous boilerplate: “TSA is committed to ensuring the security of travelers, while treating all passengers with dignity and respect,” the agency alleged as always after yet another of its abuses hits the headlines.

When it groped a woman in 2010 because she refused to submit to voyeurism, the TSA asserted that its degenerates “are trained to treat all passengers with dignity and respect.” Ditto in 2013, as its pedophiles “patted down” “a wheelchair-bound 3-year-old girl on her way to Disney World” so brutally that she sobbed, “I don’t want to go to Disney World!” That year it also persecuted a 3-year-old boy suffering from “a cardiovascular abnormality that affects his ability to eat” until his family missed its flight; again, the agency insisted despite overwhelming evidence to the contrary that “We … strive to treat all passengers with dignity and respect.” And in 2016, after stripping a Sikh of his turban (religious headgear that Sikhs must not remove in public), it bleated by rote about “treat[ing] all passengers with dignity and respect.” In hundreds more cases, the TSA equates its manhandling and insults with “dignity and respect” — Newspeak of a magnitude that would stun George Orwell.

Yet however many times the TSA repeats this lie, it can never transmute anti-Constitutional bullying and humiliation into “dignity and respect.”

Pawing the elderly isn’t the TSA’s only depravity surfacing this fortnight. Its racists have also committed Progressive America’s biggest no-no: they “profiled.”

So far, this story hasn’t incensed us as Mrs. LaBrier’s molestation has. After all, these women are Moslem. If the TSA’s going to savage anyone, it ought to be Islamists, right?

That attitude as well as our reaction to the atrocity against Mrs. LaBrier is one reason the TSA still plagues us. Expecting its incompetent buffoons to protect us is expecting what has never happened and never will. Terrorists haven’t attacked since 9/11 — if they did then, which is highly doubtful — not because of the TSA’s nonsense but because there are actually very few bad guys, and they direct their attentions elsewhere. And while the TSA’s depredations against Mrs. LaBrier are reprehensible, its depredations against all of us are: it is never Constitutionally permissible for government’s goons to “search,” “detain” or otherwise intercept passengers, whether those passengers are 6, 26, or 96 years old, whether they’re wearing jeans or turbans. The Fourth Amendment prohibits the Feds from such tyranny.

If we’re patriots, if we love liberty, the TSA’s mere existence ought to generate the fury its attack on Mrs. LaBrier has. Why doesn’t it?

To voice your opinion, or read more on personalliberty.com, go here.